Schuetzen shooting is rifle shooting in it’s simplist form. It came to America in the mid 1800s from Germany/Switzerland.

The original Target Rifles were single shot and heavy, many of them going 16 lbs or more! The target, a German 25 ring target was shot at 200 yards and used cast lead bullets with velocities in the 1,300 fps range. All this of course, was shooting in the standing position. No shooting coats our slings were allowed. Original rules called for iron sights but triggers could be of any weight. Telescopes were allowed around 1900 most of them being 5 power.

The sport of Schuetzen shooting was very popular and many towns had their own 200 yard ranges and some had built pavilions so it became a family affair.

At Nashua Fish and game we have updated some of the rules while still keeping in the sprit of the game.

We do allow center fire bolt action rifles shooting cast lead bullets. Targets are shot at the prescribed 200 yds and we fire 10 rounds for score. But don’t feel you have to shoot center fire as we also shoot 20 rounds of .22 Rim Fire at 200 yds. This would allow anyone with an interest to give it a try. We start outdoor shooting the month of May at the Leverage range. When fall arrives we move inside to the newly updated Proctor range for shooting at 25 yds.

Indoor shooting starts at 9 AM – Outdoor starts at 10 AM MONDAYS. 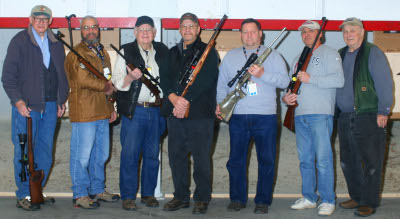